Devon was visited today by a hundred feet tall Poseidon, who is angry about the plastic pollution destroying oceans. Created by Beach Artist, Wales-based Marc Treanor, the sand etching was commissioned by the European Environmental Bureau and backed by Friends of the Earth.

Marc’s work was visible for several hours before the tide came in and carried Poseidon back to the ocean. 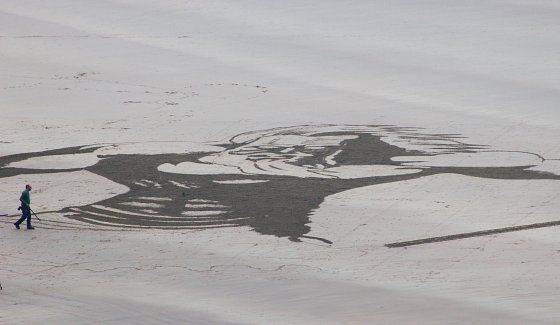 This comes as new polling data commissioned by Friends of the Earth indicates that 81% of people have done something to reduce or cut out their use of plastic, for example by purchasing a reusable shopping bag or avoiding the use of plastic straws.

Here at Saunton Sands and across the Brend Hotels group, we are taking steps to rid our hotels and restaurants of unnecessary single-use plastic. Discover more about our environmental policy, plans and how you can help reduce your plastic use when staying or dining with us.

Julian Kirby, plastic-free campaigner for Friends of the Earth, said:

“Poseidon has been defending oceans for millennia, but the current plastic pollution crisis is more terrifying than any sea monster. Tougher measures are urgently needed to protect our oceans, beaches and wildlife.

“The government must listen to the huge public concern over this issue, and chart a course for cleaner seas by committing to end all plastic pollution.”

Marc Treanor, the sand artist behind the work, said:

“I was happy to be asked to be part of this project as the subject of plastic pollution awareness seems now to have reached a critical point.  I wanted to somehow express an anger with what plastic pollution has done to the oceans, so the image of a raging Neptune hurling a plastic bottle back at us seemed apt.”

The Saunton Sands Poseidon is one of 6 works appearing on beaches across Europe in the run-up to Earth Day on 22 April. The theme of Earth Day this year is “end plastic pollution”, with all the works carrying the hashtag #BreakFreeFromPlastic, a global movement envisioning a future free from plastic pollution.

Those who want to act against plastic can join the 60,000 people who have signed Friends of the Earth’s petition calling for the government to dramatically reduce the plastic pouring into our oceans

Friends of the Earth
For more than 40 years Friends of the Earth have seen that the wellbeing of people and planet go hand in hand – and it’s been the inspiration for their campaigns. Together with thousands of people they’ve secured safer food and water, defended wildlife and natural habitats, championed the move to clean energy and acted to keep our climate stable. Be a Friend of the Earth – see things differently. For more information visit their website follow them at @friends_earth, or like their Facebook page. Friends of the Earth’s plastic-free campaign is supported by the players of the People’s Postcode Lottery

European Environmental Bureau
The EEB is the largest network of environmental citizens’ organisations in Europe. It consists of around 140 member organisations in more than 30 countries (all EU Member States plus some accession and neighbouring countries), including a growing number of European networks, and representing some 30 million individual members and supporters.

Marc Treanor
Marc is a West Pembrokeshire based artist who creates beautiful artworks on UK beaches. From geometric designs inspired by the crop circles of Wiltshire to intricately shaded portraits, Marc pushes the boundaries of what is possible with sand art – with all work united by its colossal scale and fleeting life span as the tide sweeps over it. View more of his work aton his website or by visiting his Instagram or Facebook page