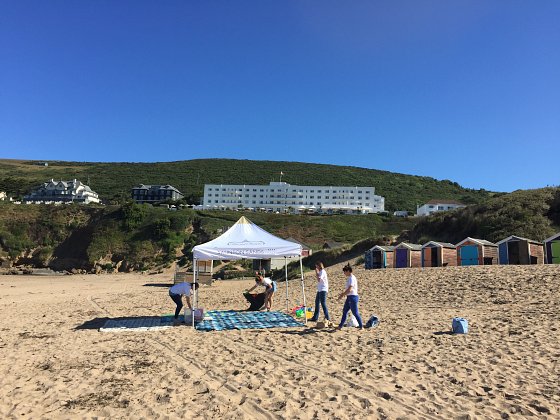 A Mum’s eye view of modelling at Saunton

I was thrilled when my 2 year old son was chosen to be a JoJo Maman Bebe model. Of course I've always had my suspicions that he's gorgeous but I felt like this gave my proud mummy ideas some validation! We were given a morning slot, expected to run 9am - 12.30pm, at Saunton Sands beach. This made me very happy as; a) what a lovely place to spend a few hours and b) I know from experience there's quite a bit of waiting around at these things, so there would be plenty of space to let my wild puppy-like toddler run free.

When the day came around, the sun was blazing (forecast to be 25 degrees) and Harrison was super excited when I told him we were going to the beach for people to take his picture, a good sign I thought! When we sauntered onto the beach the JoJo Maman Bebe chaps had set up camp in a handy beach hut and a group from Saunton Sands Hotel were busily erecting a large gazebo complete with a 'floor' of picnic blankets. This was a huge relief to me as I was starting to worry we would all burn to a crisp in the heat; my son and I are very fair... I only need to look out the window at some sun and I get a burned nose! The hotel had even provided a change mat to make a little changing station which is often a challenge on the beach.

I was given a cute but quite heavy set of clothes to put Harrison in and we were then left to our own devices to play. I decided to wait and see when they needed him before bundling the poor kid up in joggers, t-shirt and a hoody and they were completely fine with that - no mad demands or egos here. Everything was going swimmingly. Until it wasn't. About an hour after we arrived my little angel loudly announced that he 'doesn't want to go to the beach today' and refused to play with the things I'd brought with us. We were on the verge of an epic terrible twos melt down which would've involved me making a quick exit with him restrained under one arm while I made loud apologies. But luckily the team from Saunton Sands Hotel had all sorts of toys, buckets and spades which they apparently have for children staying and the novelty of a new ball which simply wasn't the boring ball mummy grabbed out of the back garden was enough to turn that frown upside down. Phew!

After that the Saunton Sands girls paired with snacks from both JoJo and the hotel and a carton of orange juice were enough to keep the wee man on track until they needed him. Once in front of the camera there was no sign of any stroppy two year old behaviour, he blooming loved it! I had no idea what a poser he is, he smiled, ran, pointed and laughed as if he'd been doing it all his life. We did have to beat a fairly hasty retreat after pics were taken because the dreaded eye-rubbing started, meaning a nap better happen soon or all hell would break loose. All the girls at JoJo Maman Bebe were so nice about us needing to go and made the whole thing seem like a breeze.

I'd put his name down to do it all again in a heartbeat as long as you could guarantee me the Saunton gazebo and toys!